MEKTOVI in combination with encorafenib was evaluated in a randomized, active-controlled, open-label, multicenter trial (COLUMBUS; NCT01909453). Eligible patients were required to have BRAF V600E or V600K mutation-positive unresectable or metastatic melanoma, as detected using the bioMerieux THxID™BRAF assay. Patients were permitted to have received immunotherapy in the adjuvant setting and one prior line of immunotherapy for unresectable locally advanced or metastatic disease. Prior use of BRAF inhibitors or MEK inhibitors was prohibited. Randomization was stratified by American Joint Committee on Cancer (AJCC) Stage (IIIB, IIIC, IVM1a or IVM1b, versus IVM1c), Eastern Cooperative Oncology Group (ECOG) performance status (0 versus 1), and prior immunotherapy for unresectable or metastatic disease (yes versus no).

The major efficacy outcome measure was progression-free survival (PFS), as assessed by a blinded independent central review, to compare MEKTOVI in combination with encorafenib with vemurafenib. Additional efficacy measures included overall survival (OS), as well as objective response rate (ORR) and duration of response (DoR) which were assessed by central review.

A total of 577 patients were randomized, 192 to the MEKTOVI in combination with encorafenib arm, 194 to the encorafenib arm, and 191 to the vemurafenib arm. Of the 383 patients randomized to either the MEKTOVI in combination with encorafenib or the vemurafenib arms, the median age was 56 years (20 to 89 years), 59% were male, 91% were White, and 72% had baseline ECOG performance status of 0. Ninety-five percent (95%) had metastatic disease, 65% were Stage IVM1c, and 4% received prior CTLA-4, PD-1, or PD-L1 directed antibodies. Twenty-eight percent (28%) had elevated baseline serum lactate dehydrogenase (LDH), 45% had ≥ 3 organs with tumor involvement at baseline, and 3% had brain metastases. Based on centralized testing, 100% of patients' tumors tested positive for BRAF mutations; BRAF V600E (88%), BRAF V600K (11%), or both (< 1%).

MEKTOVI in combination with encorafenib demonstrated a statistically significant improvement in PFS compared to vemurafenib. Efficacy results are summarized in Table 5 and Figure 1. 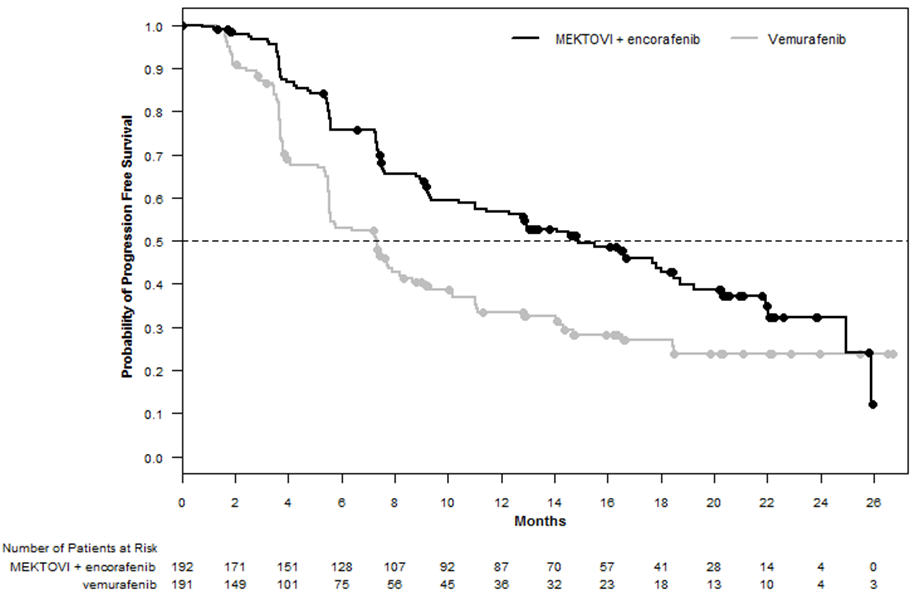