Patients with growth hormone deficiency are characterized by extracellular volume deficit. When treatment with somatropin is started this deficit is rapidly corrected. In adult patients adverse effects related to fluid retention, such as peripheral edema, face edema, stiffness in the extremities, arthralgia, myalgia and paraesthesia are common. In general these adverse effects are mild to moderate, arise within the first months of treatment and subside spontaneously or with dose-reduction. Severe hypersensitivity has been reported in post-marketing use of somatropin products.

Somatropin has been reported to reduce serum cortisol levels, possibly by affecting carrier proteins or by increased hepatic clearance. The clinical relevance of these findings may be limited. Nevertheless, corticosteroid replacement therapy should be optimised before initiation of GENOTROPIN (somatropin for injection) therapy (see WARNINGS AND PRECAUTIONS, Endocrine and Metabolism).

As with all therapeutic proteins, there is potential for immunogenicity. The detection of antibody formation is highly dependent on the sensitivity and specificity of the assay. Additionally, the observed incidence of antibody (including neutralizing antibody) positivity in an assay may be influenced by several factors including assay methodology, sample handling, timing of sample collection, concomitant medications, and underlying disease. For these reasons, comparison of the incidence of antibodies to GENOTROPIN with the incidence of antibodies to other products may be misleading. In the case of growth hormone, antibodies with binding capacities lower than 2 mg/mL have not been associated with growth attenuation. In a very small number of patients treated with somatropin, when binding capacity was greater than 2 mg/mL, interference with the growth response was observed.

The adverse events most frequently reported for the study periods were: viral infections, otitis media, pharyngitis, upper respiratory tract infections, and rhinitis. Overall, these events were consistent with the pattern of normal childhood illnesses in this age group. No evidence of a dose-related pattern was apparent. There were a higher number of patients in 2 of the somatropin-treated groups (0.033 mg/kg/day, n=105; 0.067 mg/kg/day, n=117) than in the untreated group (n=76); however the highest dose group (0.1 mg/kg/day) had only 19 patients. While, the investigators did not consider these events to be treatment-related, this cannot be ruled out.

Table 4 summarizes the frequencies of subjects with IGF-I levels below/above or within normal range, organized for all treatment groups side-by-side and across all visits from CTN 89-041 (France). Subject groups Untreated/0.033 mg/kg/wk and Untreated/0.067 mg/kg/wk include subjects who served as untreated controls for 12 months or longer, and were subsequently treated with Genotropin 0.033 mg/kg/wk or 0.067 mg/kg/wk, respectively. In figure 1, the solid reference lines were created by averaging individual upper and lower limits of normal ranges across all subjects with observed IGF-I levels at a given time-point. As such, the reference lines are for overall inference, as they represent an approximation of the exact normative values. As can be seen in the various graphs, IGF-1 levels generally ranged from <20ng/ml to 593 ng/ml. 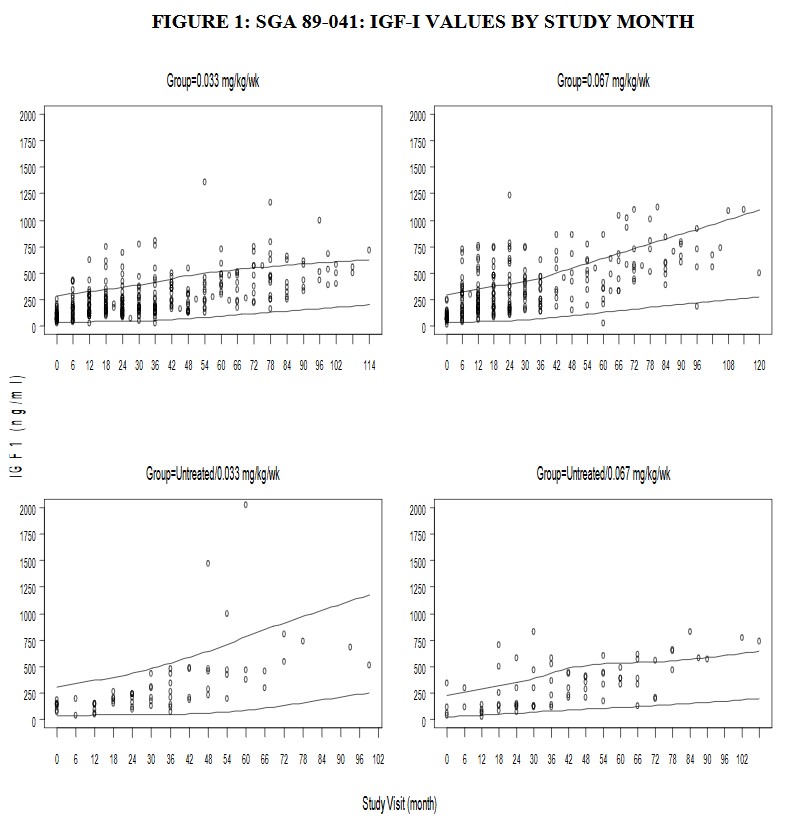 Clinical Trials in children with Turner Syndrome
In two clinical studies with GENOTROPIN in pediatric patients with Turner syndrome, the most frequently reported adverse events were respiratory illnesses (influenza, tonsillitis, otitis, sinusitis), joint pain, and urinary tract infection. The only treatment-related adverse event that occurred in more than 1 patient was joint pain. In one study in children with TS, none of the 42 patients discontinued from the study early while in the second study, none of the patients discontinued before 18 months.

Clinical Trials in children with Turner’s syndrome
In one study with patients with TS, respiratory infections (otitis, tonsillitis, sinusitis, influenza, bronchitis) represented the majority of adverse events in children with TS with eight patients in the Genotropin group and 11 patients in the Genotropin and oxandrolone groups. The instances of the respiratory infections were assessed as unrelated to study drug. No patient discontinued treatment due to a treatment related adverse event. Younger patients, including patients with TS, treated or untreated, are known to have generally greater incidence of otitis media and ear problems.

In a second study, one patient experienced sinusitis, orbital cellulitis and grand mal seizure. These events were considered to be unlikely related to the study drug as per the investigator and they were also low in frequency.

Clinical Trials in children with Idiopathic Short Stature
In two open-label clinical studies with GENOTROPIN in pediatric patients with ISS, the most commonly encountered adverse events include upper respiratory tract infections, influenza, tonsillitis, nasopharyngitis, gastroenteritis, headaches, increased appetite, pyrexia, fracture, altered mood, and arthralgia. In one of the two studies, during GENOTROPIN treatment, the mean IGF-1 standard deviation (SD) scores were maintained in the normal range. IGF-1 SD scores above +2 SD were observed as follows: 1 subject (3%), 10 subjects (30%) and 16 subjects (38%) in the untreated control, 0. 23 and the 0.47 mg/kg/week groups, respectively, had at least one measurement; while 0 subjects (0%), 2 subjects (7%) and 6 subjects (14%) had two or more consecutive IGF-1 measurements above +2 SD.

In the pivotal study, eight of the 15 subjects with upper respiratory infection were in the lower dose Genotropin treatment group (0.033 mg/kg/day; prepubertal) and seven received 0.067 mg/kg/day (six prepubertal and one pubertal).

Clinical Trials in adults with GHD
Recurrence of pituitary adenoma and of craniopharyngioma were reported in one case each. In these patient categories tumour recurrence is not uncommon, but it is as yet not possible to compare rates between patients on GH treatment and those without such substitution.

In clinical trials with GENOTROPIN in 1,145 GHD adults, the majority of the adverse events consisted of mild to moderate symptoms of fluid retention, including peripheral swelling, arthralgia, pain and stiffness of the extremities, peripheral edema, myalgia, paresthesia, and hypoesthesia. These events were reported early during therapy, and tended to be transient and/or responsive to dosage reduction.

Post-Trial Extension Studies in Adults
In expanded post-trial extension studies, diabetes mellitus developed in 12 of 3,031 patients (0.4%) during treatment with GENOTROPIN. All 12 patients had predisposing factors, e.g., elevated glycosylated hemoglobin levels and/or marked obesity, prior to receiving GENOTROPIN. Of the 3,031 patients receiving GENOTROPIN, 61 (2%) developed symptoms of carpal tunnel syndrome, which lessened after dosage reduction or treatment interruption (52) or surgery (9). Other adverse events that have been reported include generalized edema and hypoesthesia.

Because these adverse events are reported voluntarily from a population of uncertain size, it is not always possible to reliably estimate their frequency or establish a causal relationship to drug exposure. The adverse events reported during post-marketing surveillance do not differ from those listed/discussed above (see Clinical Trials Adverse Reactions) in children and adults.

Leukemia has been reported in a small number of GHD children treated with somatropin, somatrem (methionylated rhGH) and GH of pituitary origin. It is uncertain whether these cases of leukemia are related to GH therapy, the pathology of GHD itself, or other associated treatments such as radiation therapy. On the basis of current evidence, experts have not been able to conclude that GH therapy per se was responsible for these cases of leukemia. The risk for children with GHD, if any, remains to be established [see Contraindications and Warnings and Precautions)].

Serious systemic hypersensitivity reactions including anaphylactic reactions and angioedema have been reported with post­ marketing use of somatropin products (see CONTRAINDICATIONS and WARNINGS and PRECAUTIONS – Immune).

Slipped capital femoral epiphysis and Legg-Calve-Perthes disease have been reported in children treated with growth hormone. No causal relationship has been demonstrated with somatropin.